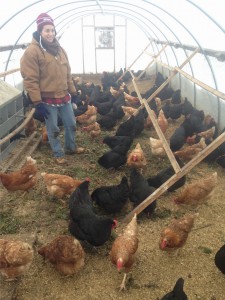 March has come along with global record breaking temperatures I am told.  It is interesting to consider that last weekend at a workshop with my crew we were learning a bit about weather patterns.  Apparently annual weather phenomena often works in opposite extremes.  For example, last year we could not drive, even with our tractors, up the hill to our greenhouses due to the snow.  Dakota and I were carrying 5-gallon buckets of snow into our greenhouses to water them.  This year on the other hand some farmers are already plowing their fields.  Typically the soils on the hill at UEF don’t allow mole-board plowing until mid to late April.  We are at least one month ahead of where we were last year.

People often ask me as a farmer how global warming has changed my business.  I think I am too new to the game to answer that question in the way they would like.  In the past fifteen years that I have been working on farms the weather has always been extremely variable, so I am only familiar with that kind of erratic climate.  2003, 2006, 2009, these were wet, wet, wet years.  2005 I remember working fixing fences on Simmons Farm in a t-shirt in January.  It seems like we typically have at least one or two days of t-shirt weather in southern New England in the winter now.  Winter of 2007/2008 the cherry trees in Providence bloomed in January due to record high temperatures.   Spring of 2012 was similar to this with seventy degree days in March and eighty degree days in April.  It was that spring that the apple trees in RI bloomed early and farmers lost a large percentage of their crop to night-time frosts that killed off the blossoms.

Al Gore mentioned an African proverb : “If you want to go quickly, go alone.  If you want to go far, go together.”  He then said we need to go far quickly! in our efforts to keep climate change from drastically changing the experience on this planet for our species and all the others as well.  Agriculture plays a huge role in this.  According to the EPA Agriculture contributes 24% of greenhouses gases globally.  Water usage in agriculture is also huge and sickeningly wasteful.  70% of global use of fresh water is agricultural according to the World Wildlife Fund (WWF).  The ironic side to all of this is the potential for agriculture to solve the problem of climate change and resource scarcity, not encourage it.   Sustainable practices such as no and low-tillage methods, cover cropping, and soil food web encouragement, actually sequester carbon out of the atmosphere and assimilate it into soil.  Some of the results led by consultants like Elaine Ingham and John Kempf are remarkable, accomplishing amazing yields without pesticides, soluble fertilizers, and even water.  In turn these yields lead to a gain for the planet by sequestering the carbon dioxide through photosynthesis into the plant and into soil.  Organic agriculture has the potential to change the planet for the better, but how to we get there?  Recently I read an article about conventional corn and soybean farmers in the midwest putting thousands of acres into a cover crop rotation (rye grass, clover, vetch, sudan, etc).  This not only gives their overworked soils a break but also sequesters carbon dioxide, builds soil food webs, and limits the amount of water and fertilizer necessary to grow the next cash crop.

It seems to me that we have the tools in our toolbox to fix many of the agricultural problems we have, effectively addressing other related problems, such as climate change.  How do we get our governments and universities to encourage sustainable methods?  It seems that is up to farmers like myself to make these practices work on our farms, be examples of forward thinking methods and smart practices.  In 2016 we are doing our best to bring these practices home to our community and continuing to teach and to learn.  If you would like to learn more about Big Train Farm’s methods check out a link here

We hope that you are well and enjoying the early spring.