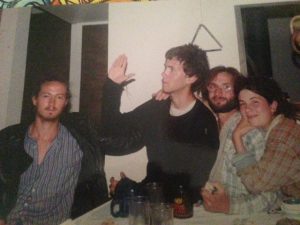 I guess it’s common knowledge that your wedding and your funeral are the two times in your life (?) when you can expect everyone to drop what they’re doing, get on a bus or plane and come and join you to celebrate your life or mourn your passing.  One of the unanticipated joys of getting married is getting to reconnect with some old friends.   This is a picture of myself and the 2000 crew of Early Morning Organic Farm in Cayuga county, New York.  James Pritty is the gentleman sitting to my right (I’m the kid waving a salute), Anton and Carolyn to my left.  I had the pleasure of reconnecting with James which initiated some rummaging through old photos to swap.  What a treat!

Thinking about my time in New York is an interesting experiment because, of all the experiences I’ve had living and working on other peoples farms, that season was the most impactful.  I say that not only because it was my first experience working on a farm but because it captured a Romantic, or noumenal, impulse in me.  It made sense on a spiritual level.  There was an idyllic beauty to the scenery, the people who came and went, the small college town nearby that seemed without problem or contention.  Production was important, and the pace was intentional, but sometimes seemed like an afterthought to the lands overall purpose.

I’ve always thought that if I had landed at any of the other farms I worked on after Early Morning before I worked there I would never have stayed in farming.  The noumenal power of the next farm I worked on, Greenview, was completely overwhelmed by the phenomenal power of production and rigger.  At that time no one lived on the property of Greenview Farm. There were not three wild-eyed boys running around, nor a farmer wife,  nor a half-pipe in the backyard of the house, nor a house.   Only one caffeine-driven maniac named Craig Totten who seemed to drive the farm forward with the force of his will and neurosis.  Greenview, in those days, was a vegetable production farm.  If you were on the property, you were there for one reason and one reason only:  to keep the wheel spinning.

We weren’t automatons at Greenview.  The place was awash in a sardonic humor and intense wit that made the biggest impression on me of maybe any other place in my life.  The produce was raised extremely intentionally and the quality was the evidence.  But at the end of the day,  Craig would give me the finger, I’d give it back to him, and then we’d drive off to our off-farm abodes where we would recover from the days labor and then meet the next morning to do it all over again.  Craig liked to say that 90% of farming “is just dragging your ass from one place to another.”  On a phenomenal, or literal level, that is absolutely true.  But thanks to the noumenal power at places like Early Morning you might never realize that.

The two places were always like a ying and yang in my mind.  Anton’s house was full of old memories, my post and beam shack full of late 20th century, pre-9/11 anti-globilization anarchism.  The barn and the tractor were old but reliable and the fireflies lit up the bordering woods in the summer like Christmas lights.  Anton harvested his vegetables into old, half-destroyed cardboard boxes while Craig used fresh ergonomic poly-bins.  Craig’s tractor was fresh off the lot, all business out of the fields was conducted under new canopy tents and field work was done with fresh, new harvesting knives and scissors.  The land had been an old nursery field, no buildings, no memories left.  But Anton’s vision seemed sometimes lackadaisical and ungrounded.  Craig always seemed to be building, growing, expanding, moving towards complexity, mechanization.  That made sense to me in a big picture way.  The world needed an organic-alterative and there for our farms should be producing a lot of food and doing it efficiently.  Watching the fireflies and swimming in the irrigation pond wasn’t going to get the world fed, it seemed to me.

My own business has swayed back and forth between these two some-what contrasting approaches.  Sometimes I am the ferocious efficiency hawk, other times the transcendentalist hack-philosopher.  Over the years I’ve struggled to get out from under Craig’s phantom eye, watching me sometimes move too slowly or allow time for the volunteers and employees to chat and play.  Many times I meditate back to Anton walking across thistles and stones in his unsurpassably rugged bare feet, quietly hustling and insisting others do so simply by example.  I’ve somehow managed by balancing these two men, my two mentors, to become a boss that most of the time I can stand and others seem to enjoy working for.  One of the most profound blessings of running Big Train Farm are the relationships I’ve been lucky to form.  It seems that, thanks to borrowing from both of these old farmers, the autocrat and the hippie, I’ve managed to form some kind of amalgam of both.