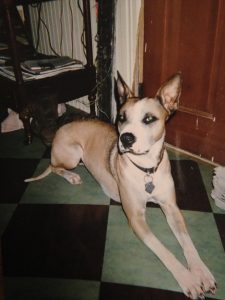 There is so much to say about Sally Lee.  I’m fortunate to have known her parents so as to understand a little better where she came from.  Her mother, Shiva, was my friend Rusty’s dog and her dad, Dante, was Willa’s.  Shiva had several litters with Dante in a fairly short amount of time.  My friend Marc can verify some of these details (they are a little fuzzy in my mind after thirteen years) but I recall the first litter consisted of eleven puppies.  Each successive litter produced fewer puppies and Shiva took less and less interest in them.  Anyway, not to drag my friends through the mud of being irresponsible pet owners since coincidently this union produced the best friend I have ever had.  Sally was from Shiva’s first litter and had her markings (fawn colored).  I picked her out the day after she was born and named her that day.  Marc reminded me that I used to come over as often as I could to check on her and I pulled the bigger pups off of Shiva so that Sally could nurse. 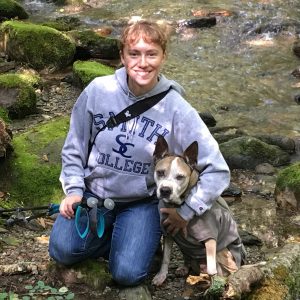 Sally spent the first year of her life on Simmons Farm, where I used to work.  She had several friends there including Jack, the Simmon’s border collie, and Larry and PeeWee, Mis’s two miniature dachshunds.  Sally then moved up to Providence where she and I lived at different locations until moving to Scituate in 2011.  Starting Big Train Farm in 2008, Sally spent virtually everyday with me on the farm.  Whilst living on the west end we would make visits to a dog park behind Bell Street Chapel.  Through Sally I met Ray Perrault at the park.  He recommended I host my CSA program at Eddy Hall in Bell Street Chapel, which I’ve done since 2009.  Ironically I was guest minister at Bell Street (at Ray’s request) last weekend (Dec 2nd, 2018) where I was able to give Sally a small tribute for bringing BSC into my life.  The next day Mindy and I put her down at Scituate Animal Hospital. 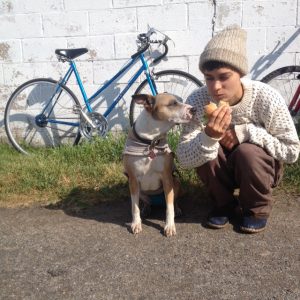 Through her long career with Big Train Farm I always wrote off her expenses on my taxes.  She was a huge help to my farming career in practical support and emotional support.  She was in charge of pest control of which she performed honorably and faithfully.  She was also my Moral Booster in Chief and tasked with welcoming people to the farm and making people feel comfortable there.  I will never be able to live up to or replicate the warmth and generosity that Sally could provide to people so easily.  Her gentle nature and joyful charisma was experienced by so many people who have visited or worked on the farm with us.  These are some of her irreplaceable virtues that we will deeply miss. 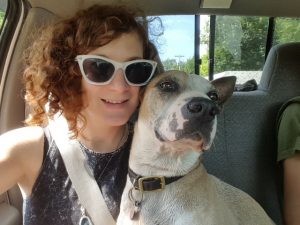 Dogs provide a consistency to our lives that I’m not sure any other creature can.  Dogs, although adaptable through training, are who they are and offer a predictability that we can’t expect from people.  Loyalty is a term used to describe dogs and it’s true that many dogs are loyal in the sense that they are attached to their owners.  But dogs are also loyal in their character and, even more profound, so forgiving of our own lack there of.  Sally has seen me at my worst and at my best but she never wavered in her consistency.  I know that kind of character is very special and I concede that despite all the training Sally endured with me she was good already in her heart. 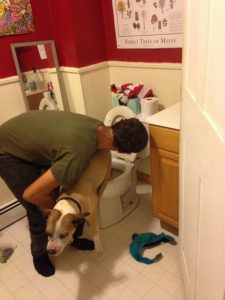 We put up with a lot together.  After popping two vertebrae in her back she went through major surgery in 2013 which severed the nerves that controlled her bladder and her colon.   It was my duty to squeeze this fifty pound dogs bladder three or four times a day for the last five years.  Bent over the toilet with her tail bobbing a few inches from my face I would lift her up and squeeze below her rib cage to push out as much urine as I could and, if lucky, a few stubborn turds as well.  Luckily Sally was able to regain her mobility after surgery but she was never the same afterwards.  The little dog who used to be able to jump from a standstill into the open window of my Silverado now had to be carried up and down our narrow staircase at our apartment in Scituate. 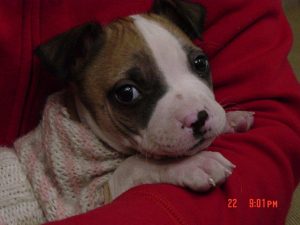 With the acquisition of our new property in Chepachet Mindy and I had always looked forward to having a comfortable place for Sally to spend the remaining years of her life.  Having a one-story house allowed us to open the front door and let her out without having to navigate the formidable stairs of our apartment.  At our wedding my friend Jim looked around and said: “It looks like Sally finally made it to the promised land.”  It was really satisfying to be able to have her here, on the new farm, for nearly a whole year.  She got to lounge on the hot days in an air conditioned room that Mindy set up for her, and was always able to check-out whenever she wanted to. 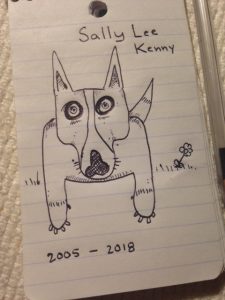 “Served with me 30 years. Fought in 21 engagements with the Commanche and the Kiowa. Cherful in all weathers, never sherked at task. Splendid behavior”

One thought on “Sally”