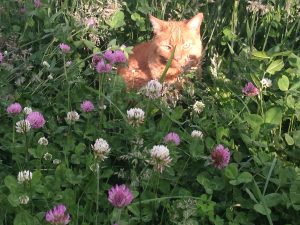 The instances that appear at the forefront of my thinking when I reflect on the past year are often non-events: ideas of a better world and my place and my farms place within that world.  They’re instances of goals unfulfilled within the context of many, many physical goals actualized.  Ideas of expanding the role of agriculture in our lives and consciousness, ideas of conservation and progress.  The hope of a year where we see more farm land salvaged in RI rather than lost to development.  A hope for the momentum of regenerative agriculture tipping the scales towards a healthy and less hateful world.  Farming in my eyes, in particular the social, racial, and ecological injustice of it, is like a euphemism for the world as a whole.  But unlike the rest of the world with it’s seemingly inextricable problems the solutions to our agricultural problems are clear.  And with the adoption of regenerative processes for our farms and landscapes we could see a cascade of relief in virtually all human matters of complaint.  From the global climate crisis, to biodiversity to water scarcity agriculture is a major player in resource concerns across the planet.  When I think about moving into the third decade of the 21st century and the fifth decade of my life I reflect on how BTF plays a role in this greater push toward a more sensible and just understanding of land and heart.

I have a theory that profit and beauty are mutually exclusive and inversely proportional.  Although beauty, I would surrender, is in the eye of the beholder we should consider some patterns.  For instance consider a drive in your car, wether it is on your way to work or just for leisure.  If you belong to the majority of commuters than your commute gets decidedly worse as you get closer to your job (because as a typical commuter you are moving from a lesser density of people to a higher).  Traffic of course increases but so too does the proliferation of gas stations, strip malls, and so on.  These businesses are where they are because of the flow of people and the sloughing off of money that inevitably follows the greater flow of traffic.  Instead consider a leisure drive in the country or a vacation trip somewhere rural.  The landscape becomes more calming, more inviting as the machinations of profit become less and less, breaking away completely when inside a wholly natural landscape.  Looking out from a pristine vantage point you would cringe to have your view interrupted by golden arches or a shell station sign.  But you would not cringe if a rural small dairy was nestled in the landscape.  Just like humans respond positively to the color green in our world (chlorophylla) we naturally recoil from the artificial and the baseless.  Farms, even though man-made and full of industries insistence, still strike us as a natural part of a landscape.  The more industrial the farm often the more offensive.  Same with residences.  Think of a neighborhood developed over time from the mid 20th century:  individual homes, each different from the next, often quirky and weird (and often money pits nowadays) and think of a landscape changed in a season into small-lot cookie cutter homes.  Which is more pleasant?  Which is more profitable?

When we first started clearing our property on Snake Hill Road five years ago their was an anxious buzz around the neighborhood.  Certainly the eleven acre property would soon be cleared for a subdivision.  When people found out that a working farm would be starting up here we were met with relief and, of course, skepticism because who would be crazy enough to start a farm from scratch?  You can’t make any money from farming, right?

Here’s a newsflash: farming is a difficult business model.  Farm “start-ups” don’t sell for millions of dollars.  Farms are not started by people motivated by profit.  They are started by people motivated by many different things but green paper is not one of them.  One of those many things that I believe is shared (even by the gruffest of farmers) is a thirst for beauty.  That our farms are not profit/growth machines fits into my theory:  there for they are beautiful.  That theory is generally attested to.  You can do your own sample.  Show someone a picture of the route 6 Johnston hillside before and after it was cleared, dynamited, and paved in order for a BJ’s to move 2.4 miles from its previous location on Hartford avenue.  Ask that person which image is more pleasant.  Bring someone from your sample pool to my farm and ask them if the air tastes better here or on route 44 at the Smithfield Crossings.   Beauty may be in the eye of the beholder but I think what I’m saying will strike you as fairly obvious.

It’s important that we insist on a better world for young people to grow up in.  To me a better world is synonymous with a more beautiful one and, as you see, since beauty and profit are inversely proportional (more of one means less of the other) I have to advocate for a less profitable world.  On a more realistic angle I would be satisfied if more young people could understand that farming could provide them with a beautiful life albeit one of simple means.  If beautifying the world is a priority than sequestering land into small, shakily profitable farms is a worthy avenue of attack.  In reflecting on 2019 and the new decade around the corner I would like to admit that I did not do enough to make this goal a reality.  I intend to do better and I’d be very grateful if you could help me.

One of the most important things that was said in 2019 came from the lips of an organic farmer from Montana.  She said that the farming methods best suited to deal with the impacts of climate change are the very same practices that will help remediate [climate change].  Inspired by this, and building on this, I say the practices that make farming good for our community are the very same practices that make it a more beautiful place to live.  Good luck everybody and support people who make life a little more pleasant.

PS. The truth is that farms that employ regenerative practices on their land have potential to be even more beautiful and more profitable!  So there may be a few holes in my theory but as a general rule I think it holds up!