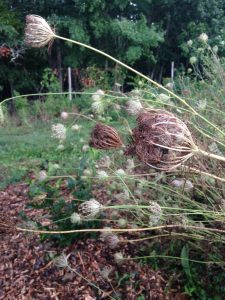 I’m going to tell you why it’s helpful to cut the greens off your carrots before you store them in your refrigerator.

Plants exhibit two types of growth.  Primary growth is the type of expansion that happens at the tips of stems and from lateral buds found at the intersection (the nodes) of leaves and stems.  Think of a basil plant.  It’s green growth expands from the tip, the top, of the plant to produce more stem and leaves.  Eventually that growth tip will change and produce a bud where flowers develop.  At that point growers often pinch the upper stems of their basil.  This produces a hormonal change in the plant that causes the buds at the lower nodes to begin “branching out”.  This lateral bud growth is also an example of primary growth.  In order to get the plant to produce more stems and leaves (the primary reason for growing basil) you removed the top stem which has stopped it’s primary growth and encouraged the lower incipient stems to start their primary growth.

Secondary Growth is the process by which plants reinforce their stems by growing outward.  The most striking example is the amazing production of wood and bark by plants that have evolved into trees.  If you think of a trunk that has been cut (a stump) then you are thinking of a cross-section.  Towards the outer circumference of a tree trunk is a thin ring of cells called the vascular cambium.  This ring of cells is a chain of growth points which cause the tree to produce cells both behind the ring and in front of the ring.  As tree grows up (by primary growth at the tips of it’s twigs) all the old stems from previous years are getting thicker and thicker because of the vascular cambium producing secondary growth.  The cells that grow on the inside of the cambium produce water transporting tissue.  The cells that grow along the outside produce sugar transporting tissue.  Both of these tissues we’d recognize as “wood”.

Plants much smaller than trees produce secondary growth.  The term herbaceous is often used to describe a plant that only grows by primary growth.  Basil, for example, grows without ever producing wood.  Other plants that we might think of as “herbs”, or herbaceous, will produce woody tissue in their stems, even if they will not have living, overwintering stems.   Goldenrod is an example of a plant with a persistent woody stem in the winter but, unlike a tree, only the root system contains living tissues.

Carrots are herbaceous plants their first year of growth.  They put out a rosette of leaves at ground level with leaf stems that can grow very tall if left un-dug, weeded, and well fertilized.  These leaves never become woody and if allowed to grow into winter will be killed by a heavy frost or freeze.  The root however can survive and during a carrots second year of growth the plant create an elongated stem with more traditional leaf/stem patterns (cauline leaves).  These stems will flower and go to seed (Queen Anne’s Lace is the wildflower wild-type of our domesticated carrot).  Once the flowers have matured the stems will become woody and hard.  This is an example of secondary growth.  Again, unlike a tree, the vascular cambium and all the above-ground parts of the carrot will die.  In fact, after the carrot plant sets seed during it’s second growth season, it’s root will also die.  This type of growth pattern (taproot and rosette growth in year one, stem, flower, and seed production in year two) is called biannual growth.

So, during the first year of our carrots life it produces the characteristic tap root that we love to eat.  As growers we allow that tap root to form and the leaves to grow before we pull out the root for eating or selling.  During the first year the growth of the carrot is all the result of primary growth and all the vegetative parts (above ground parts) are leafy and green.  This means that all the leaves of the carrot conduct a lot of water from the soil through the root.  Water is drawn out of the soil through roots by a process called evapotranspiration.  Primary growth produces leaves and stems that perform this process.  The water turgor that results keeps herbaceous plants upright but every cell in the herb needs to be well supplied with water.  This is why a seedling wilts when it does not have enough water.  Secondary growth produces tissue that conduct far less water and instead uses the woody growth to support the plants upright posture.  This is why a tree trunk does not wilt and sag when it’s dry although the tree’s leaves and stems do.  Woody plants have evolved to grow tall without needing the massive amounts of water an herbaceous plant their size would require.

Now, to wrap up:  When you remove a carrot from the soil with the leaves on (the result of primary growth) evapotranspiration is still occurring.  This will eventually dry-out your carrot until it becomes flaccid and wobbly.  Now if you remove the tops you remove that pumping action that pulls water from the root to the stem and leaves but you will still loose water from the surface of the bare root.  To avoid this you put your carrot roots into a plastic bag or humid container.  This produces an equilibrium gradient (100% outside, 100% inside) that keeps your carrots turgid.  By storing washed and topped carrots at the appropriate temperature you can keep your carrots firm and tasty for many, many months.  If you succeed in keeping your carrots alive in the fridge or root cellar until the spring you can re-plant the root and watch the process of primary growth and then secondary growth play out as the carrot goes through it’s second year of biannual growth to produce flowers and, eventually, seed.