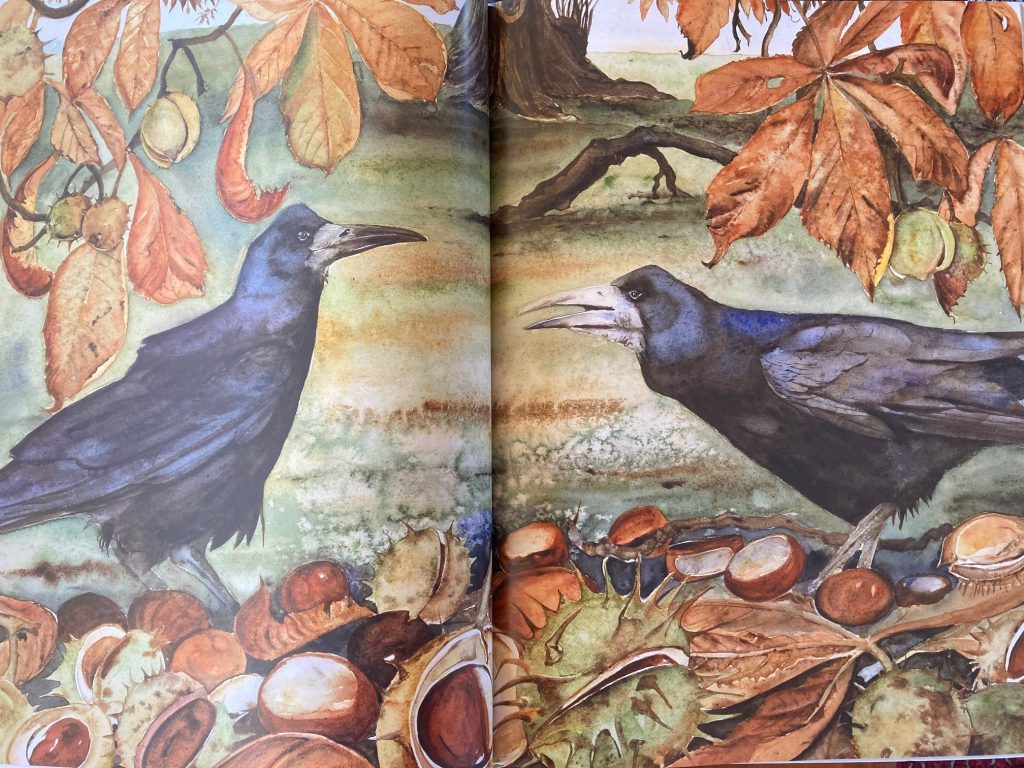 (Image from The Lost Words by Robert Macfarlane and Jackie Morris)

It may seem hopelessly sentimental to lament that in the 21st century American adults, much less children, can no longer distinguish tufts of wheat from rye.  It was lamented perhaps more appropriately in the 19th centuries when millions of men and women left the “plow in the field” to make their livings in the industrializing cities.  Even though the masses being unable to tell one from another these two staple grains must have left naturalists and agriculturalist with a sense of alarm, even dread, I think it would have been unimaginable to them that someday children would not be able to tell the difference between a maple tree and an oak, recognize an acorn, or distinguish a field mouse from a shrew.  Such an imposing presence as an oak, one would imagine, could never go unnoticed or unnamed.  It would be like living among elephants and being content that the thing hanging from their giant face might be called a “trunk” or just as well be called a “tentacle.”  Yet I have worked with adults, college graduates, who didn’t understand that butterflies come from caterpillars.  Most people who visit the farm cannot identify the most simple bird calls, point out poison ivy, or confidently identify common trees.

When Josiah was born my friends gave us a book called Lost Words.  I’ll let it describe itself:

“When the most recent edition of the Oxford Junior Dictionary – widely used in schools around the world – was published, a sharp-eyed reader soon noticed that forty common words concerning nature had been dropped.  These words were no longer being used enough by children to merit their place in the dictionary.  The list of these “lost words” included acorn, bluebell, dandelion, fern, heron, kingfisher, newt, otter, and willow.  Among the words taking their place were attachment, blog, broadband, bullet-point, cut-and-paste, and voice-mail.  The news of these substitutions – the outdoor and natural being displaced by the indoor and virtual – became seen by many as a powerful sign of the growing gulf between childhood and the natural world.”

To the outdoor person of the 19th century wringing their hands over the blurring of wheat and rye this degree of displacement (a child not recognizing a dandelion) would be simply unbelievable.  As we look towards the future being designed for us in silicon valley I’m afraid we are set to move this bar even further afield from the sad place it hangs now.  Children that cannot tell, or have no interest in telling, a kingfisher from a mourning dove, may be living in a world where not only natural things cannot be distinguished from one another, but that natural and virtual themselves cannot be teased apart.

I don’t believe we are at this point… yet.  It may seem that young people’s worlds revolve around their smart devises but in the end they seem to function more as coping mechanisms then actual stand-ins for realities.  Even if they don’t understand it I think kids are still yearning for reality.  For instance, if I am looking at a post of someone doing something exciting I am jealous or insecure because I want to be doing that thing or something equivalently cool.  I want to be known as someone interesting in reality.  It’s the difference between going to a concert and watching a recording.  One is an event the other is an interpretation.  The bored places that my generation would spend in their daydreams, hobbies or in books or in the impulsive walk has been occupied by an army of virtual distracters.  Finally the feeding frenzy of virtual impulsiveness is being exposed, for what we all could have, should have seen: a greed-driven social experiment that is washing the color from adult life and crushing our kids.

Kids don’t need smart phones.  Despite what they might believe they can live without them.  Shockingly, according to the current data on anxiety disorders in kids, they may have a better chance of surviving without them.  A kid may need a way to get in touch with a parent.  This does not mean they need a devise that has access to all the information that humanity has ever generated and is dominated by platforms designed to addict them.  I had an eighteen year old man working for me several years back.  He had no cellphone and grew up without a personal computer.  I asked him how he got his work done for school.  He told me he went to the library.

What I am getting at, tying the world of virtual distractions to the point that many people today do not know the most basic things about the natural world around them, is not that we can simply get some apps, even guidebooks, together and solve this problem.  Sending kids to camp doesn’t solve it in many cases either.  In truth it’s not so much the identifying of a maple leaf from an oak leaf that I’m concerned about.  It’s the reverence for damp leaves falling on your neck.  Telling a frog from a toad is less important than having tadpoles between your toes.  Knowing a bluebird from a bluejay is not valuable, perhaps at all, compared to peering into a nest of splotched eggs, feeling the joy of watching barn swallow juveniles in their first flights or the sorrow of a fledgling found dead in the yard.  The compartmentalizing left brain follows the life-embracing right.

Children do not fall in love with nature by way of guide books, placing names to things, distilling nature into latin and taxa.  They, we, fall in love when we fall down and scrap our knees.  I came to love nature by sitting in a sanctuary of forest, a undeveloped, quiet wood lot on a small private road by the Glen.  Watching as it was bulldozed was one of the, if not the, most important developmental moments of my life.  A common place of alchemy made into an exclusive place of entropy.  Let a child fall in love with a woodlot and mourn it’s loss to the new home or commercial development.  You can’t grieve what you never loved.  As children we shouldn’t be shielded from the heartbreak of knowing a brooked wood torn asunder to make way for a gas station.  A child has to understand the difference between a system, a natural system, that’s functional purpose, or dharma if you like, is to promote life and growth, to an artificial system, that’s functional purpose is to promote diabetes, heart-disease, foul air, poisoned water.

If our culture raised children in this way then we would already be celebrating what we all know we need: beauty in our surroundings.  It is seen as a disgrace that any child should grow up without adequate food, water, or access to health care and education.  I think it is equally disgraceful that any child, any child, should grow up without access to at least twenty acres of woods, meadow, open desert within a walk or a short bike ride of where they live.  I’m sorry but parks are not good enough.  Mown grass, pruned shrubs, invasive bird species and hybrid trees do not foster imagination like stinging nettle, fox, and red maple in the marsh.

I’m a dreamer.  That this is a dream is maybe a sad truth (but not a fact).

Truths can change.  Dreams can become realities.  It may be hard to imagine a society arranged around the priority of providing nature as a staple for a humane life.  Clearly it was difficult for our ancestors to accept that people might not someday tell wheat from rye.  It is troubling that our young people’s natural literacy is at such a frightening low but even more frightening is what may be coming if we continue to prioritize the synthetic over the photosynthetic.  Eventually what we once called the natural world could be so bled out, so un-wilded, that it will have no appeal to our imaginations.  This is the world the meta verse of Mr. Zuckerberg first requires.  After all a healthy, inspiring, and fulfilling real world is the primary competitor to any virtual one.  Striping nature down to a caricature, a world where one can’t tell grass from tree, bird from mouse, is fertile soil for a private virtual world to spring forth from.

Human beings are notorious for looking for the greener grass over the hill.  The meta verse, or virtual reality, will supposedly offer that grass: the hike more majestic, the concert more historical, etc, etc, etc, etc.  But think of the octopus or the star nosed mole.  Human beings will search the galaxies for other, strange worlds, but they will never find anything stranger than a crab spider inside an aster or a skunk cabbage melting the snow.  What we have is more than just worth celebrating.  It’s our salvation and our redemption all in one.

Start early.  If you didn’t, then just start now.

2 thoughts on “Wheat From Rye”