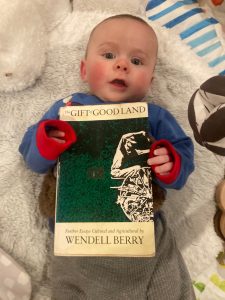 Wendell Berry, natural philosopher well-known to organic farmers and back-to-the-landers, once quipped about modern agriculture trying to take the farmer out of farming.  Or, at the very least, to so insulate her from the natural world where farming takes place that she would never break a sweat, knick her flesh, or dirty her pants.  He was wringing his calloused, Kentuckian hands over such new inventions as environmental-controlled cabins on tractors and, what has become so ubiquitous now, remotely controlled combines performing automated harvests while monitored by a “farmer” from… somewhere else.   Wendell is one of those particular kinds of people who still enjoys working in the rain, the smell of manure, and dirt that will simply not come out from between your wrinkles.

As you can imagine the concerns of sentimentalists like Wendell Berry, Vandava Shiva, and Eileen Crist have not been heeded. We are now on the verge of an agricultural system ready to collapse, a system which has been estimated to have approximately sixty harvests left to offer before becoming completely exhausted.

Just a minute now… that is quite a jump to go from tractor’s with air conditioning to the end of the world, isn’t it?

Our societie’s relationship to technology has come to a reckoning point.  The human relationship with nature has become more abstract and less grounded over the twentieth century and has reached a tragically dismal disassociation for many in the twenty-first. Ironically during this same period our scientific understanding of natural systems and organisms has exponentially increased.  We have never been better poised to understand in a materialist way the organisms that we are extirpating from the planet.  We know more about the ecology of the rainforests, the oceans, volcanoes, and temperate environments, along with the life they sustain, than ever before.  It’s as though we have the opportunity to watch all of these remarkable systems die in high-definition, knowing the mechanisms of the octopus’s reproductive cycle, down to each quark, as it withers in the last tank of the last aquarium.  There is something wholly fitting of a species that in it’s buried heart loves these creatures with that originalism of a child, but unable to change it’s adult excesses, has to watch it all go amidst the cumulation of all scientific knowledge.

I have had little choice but to believe that agriculture, a system which currently manages 38% of the planet’s land, holds the key to a livable, co-habitable world in the future.  Our current industrial system of raising food is one of drone-tractors, pollution of air and waterways, and the off-gassing of soil carbon through tillage and soil organic matter dissolution.  The tenets of regenerative agriculture would ask the world’s farmers and land managers to be our saviors, storing carbon in their soils (and out of the atmosphere and oceans), providing habitat for flora and fauna, reducing our use of natural resources like oil and water, and re-beautifying the landscape.  If these goals are tenable then there would be no greater honor or call to service than to be a farmer, and no closer relationship to nature.

The approach of regenerative agriculture is not complex.  You do not need a master’s degree to implement it on your farm, in your city, or in your backyard.  It is, in it’s most distilled, a model of managing land that maximizes biodiversity and maintains soil at it’s maximum potential for organic matter.  For example a tallgrass prairie in South Dakota had a pre-farming soil organic matter content around 6-7%.  Your average ranch in the state is somewhere between 1-2%.  Some regenerative farmers in South Dakota have returned their ranches to this pre-farming level and have re-sequestered carbon to the tune of 11,600 pounds of carbon per percent per acre.  So, these farmers are relocating carbon (think carbon dioxide, greenhouse gas) to the tune of almost twelve thousand pounds for every one percent increase they make in soil organic matter in the soil per acre.  That’s a lot.  Many academics doubt it is even possible.

This is done without the latest GMO technology.  This beats county averages for yield without nitrogen fertilizer applications.  This does not require, or even consider, the latest proprietary technology of waxy protective lipid-containing structures to improve the penetration of pesticides into our crops(!), nor does it depend on the latest slow-release micro-nutrient technology.  It also doesn’t require us to treat our soil with contempt, as though it’s inferior to a hydroponic medium in a Controlled Environment Agriculture (CEA) factory.

No, it requires animals, plants, insects, soil biota, and human beings in a relationship for our mutual benefit.  It calls for more than just a scientific understanding of land, but a reverence for it.

Yet even in Rhode Island some of our academics are looking to technology to save us.  The University of Rhode Island is looking to the future and they see CEAs as the solution;  “greenhouses” the size of shopping malls sprawling on what were once productive soils.  Investments in new infrastructure between 60 and 115 million dollars per facility to grow crops in a manner which many people believe to produce a lower-quality product (hydroponics).

Perhaps you can make the argument that hydroponic factories are a good use of otherwise tainted land (brownfields, as in the case of Gotham Greens in Providence), but on prime farmland?  Constructing, from the road what look like industrial parks, on some of the most beautiful land RI has to offer?

Also, according to the Dean of the College of Environment and Life Sciences, people who operate these facilities will need at least bachelor’s level, if not master’s level, training in order to work in them.  So farming in the 21st century will require a master’s degree and you get to work… inside?

Farmland is a unique thing.  In New England it is most similar to our forests and salt marshes, coastlines and beaches.  There is a collective benefit in your farm being part of the landscape.  It is beautifying, it is fantastic, and it stokes the imagination of children (and adults like me), not to mention provides food.  The phenomenon of chlorophylla (“the love of green”) is so hugely important to us on a conscious and subconscious level.  The benefits of nature to our mental and physical health have been put to bed, well documented and understood.  Beauty, in the case of nature, is not in the eye of the beholder.  In this sense farms need to be maintained and expanded to promote as much beauty as they can.  What’s more our farms, along with our forests, are a critical resource for battling climate change and the planetary health crisis in general.

RI farms can be part of the solution to our estrangement from nature.  Let’s improve our land with regenerative practices and stop pretending like we don’t already have the tools we need to succeed.

Remember the taste of good soil.  Start early.  If you didn’t, start now.