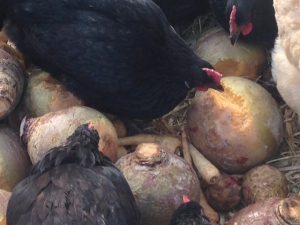 Here is a fable that I made up on Monday while seeding.  It is probably some distortion of Aesop, but I wasn’t familiar with it.  Here it goes:

A farmer was seeding trays of mustard, arduously rolling each tiny little seed into her trays.  She had three trays of mustard.  One was red, one was green, and one was purple.  She had all three tags written out and placed in the trays accordingly.  Then she realized that “Oh No!” she had accidentally seeded the green mustard seeds into the purple mustard seed tray and the purple mustard seeds into the green mustard seed trays.  She hastily began pulling out the thousand tiny seeds from each tray, laid them aside, then replaced them into their appropriate trays.  She had a lot to do that day, so she hustled and figured that she probably missed a dozen or so seeds from each tray.  When she was finally done she stepped back and looked at her work.  Slapping herself on the forehead she cried out “I should have switched the tags!”  Moral – Work smarter, not harder…

That is a lesson that I always have struggled to actualize.  My new mantra is “switch the tags”.  Making things easier on themselves should be every farmers priority.  But with all the big and little things to do it’s easy to barge ahead like a rhinoceros. 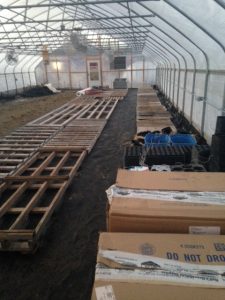 The first wave of seeding has begun.  My good pal Jeffrey came out during his winter break from teaching to help me shlep pallets in the mud.  Now all of those pallets are covered with seedling trays.  Onions, leeks, celery root, parsley, celery, beets, lettuce, micro greens, salad mix, tomatoes, and flowers are all settled into spring potting mix.  Next week we will seed our first planting of spinach and watch as our first planting of carrots germinates in our high tunnels.  From this point we will be seeding in the greenhouse until Oct, making a constant succession of vegetables for our customers and ourselves. 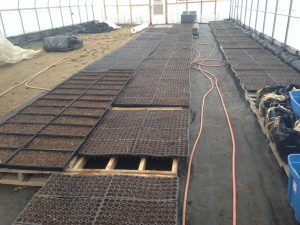 We have so many exciting projects to look forward to in 2018 it’s actually hard to know where to begin.  Our biggest projects for the spring include building another 96’x30′ high tunnel, a tool shed, and a lunch shed.  We have to clear about a 1/4 acre of woods to expand our chicken and compost yard.   We’ve got piles of brush to burn and workshops to prepare for.  Our seventh annual Soil, Plant, and Farm Methods course is coming up as well (always a lot of fun).  When the ground drys up we will be preparing raised beds over the whole farm for our annuals and also be putting in some of our first perennial crops (strawberries, rhubarb, elderberry and asparagus).  It’s an exiting time, with lots of promise.  The seasons operate like this in my mind:  the promise of Spring, the reality of Summer, the glory of Fall, and the relief of Winter.  Spring is the time to lock down your plans for the year, arrange your ducks, and start movement in the right direction.  As the pace picks up you have to sometimes remember to, simply, move the tags.